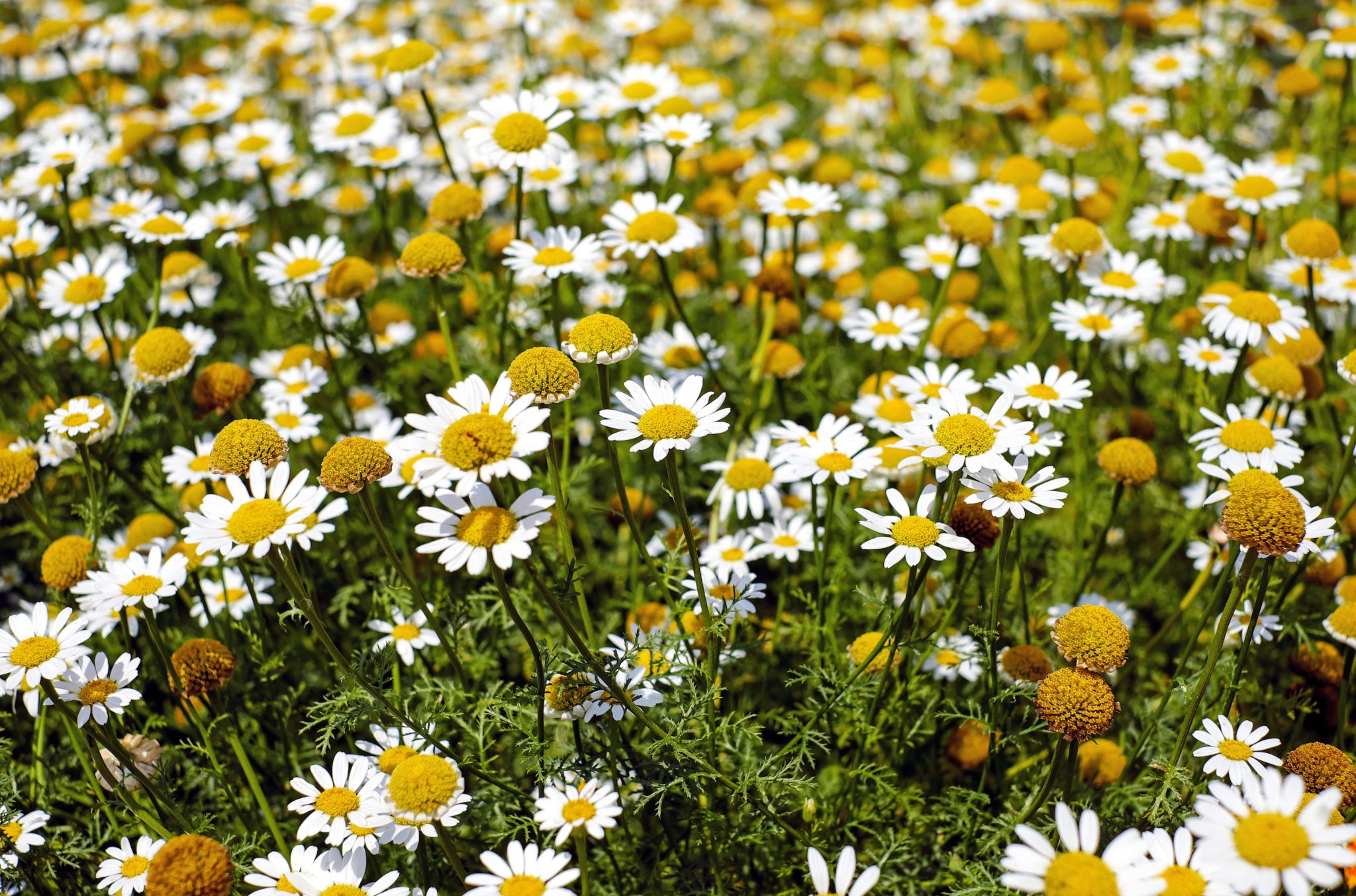 What is your favorite essential oil? When we ask our students this question, some of the answers are rose, neroli, orange, geranium, and wintergreen. Even plai! Very rarely does someone say roman chamomile (Anthemis nobilis, syn Chamaelum nobile). The aroma of roman chamomile is quite unique and not appreciated by all, which is a shame—this is one essential oil that is an absolute must in your essential oil medicine bag.

Many essential oils have a similar sibling that can be used as a substitute, but then there are some oils which have no replacement. Some of these oils, in our opinion, are rose, helichrysum italicum, cistus, inula, khella, and of course, roman chamomile. This beautiful essential oil has a fruity, apple-like scent. The name is derived from the Greek, meaning ground apple, and the latin nobilis refers to flowers that are noble in nature.

The Chemical Components of Roman Chamomile

Roman chamomile essential oil is composed primarily of esters, ranging from 66% to 78%. Ester rich oils are antispasmodic, anti inflammatory, calming to the CNS, and sedative.

Okay, so that is great, you say. What does that mean to me?

We agree with your question—so many people write about essential oils, throwing around therapeutic terms, but they do not explain what those terms are or how to use the oils based on those terms.

Here are some of the benefits and uses of R. Chamomile that we have experienced and why they work.

Let us start with the physical body and go system by system. This will be fun!

We have used roman chamomile in many digestive and belly blends. It is very effective for conditions such as gas, colitis, diarrhea, cramping, IBS (irritable bowel syndrome) and indigestion (antispasmodic, carminative, digestive and stomachic). It is also helpful with liver issues (cholagogue).

We use roman chamomile in most of our respiratory blends. Most people do not think of this as a “respiratory” oil but it is so very beneficial when used in an inhaler or steam for coughs, bronchitis, or flu. It helps alleviate spasmodic coughs. It is also the premier oils for those with asthma. Oils high in 1,8-cineole like eucalyptus globulus can be irritating to asthmatics (antispasmodic).

Great for all things menstruative. Fantastic for menstrual cramps (dysmenorrhea). Apply a few drops, 5 or so, neat on the belly. It’s good for PMS (antispasmodic) and beneficial for amenorrhea, or missing periods (emmenagogue).

We like to think of this oil as an antispasmodic for the emotions. R. chamomile is soothing and calming to the nervous system. It reduces anxiety and has antidepressant qualities. Peter Holmes states that it is a strong cerebral sedative (anxiolytic, antidepressant and sedative).

Roman chamomile is fantastic for the skin primarily because it is made up over 50 percent of esters. Esters are one of the chemical families that we study in all our programs. Esters are soothing and cooling. R. chamomile is wonderful to cool and soothe dry sensitive skin. It helps alleviate many skin conditions such as psoriasis, acne, eczema, herpes, allergic conditions and many other kinds of dermatitis (cicatrisant and emollient).

Valnet suggest that roman chamomile is helpful in stimulating the production of white corpuscles which help fight infection (immune stimulant).

For Kids
Roman chamomile is one of the safest oils to use with children, for all of the above reasons. We have used ONE drop of roman chamomile in a little bit of olive oil on infants for colic. According to J. Lawless, Roman chamomile may help alleviate teething pain and discomfort.

Roman chamomile creates a boundary of safety and ease and helps the sympathetic nervous system stabilize and decompress. It is also anchoring and soothing for people that have suffered from extreme trauma, abuse and have PTSD.

Roman chamomile comforts the head and brain, and helps those that are impatient and short fused have a little more slack. Overall it creates a feeling of all is well and safety for those to be themselves. The aroma is soothing and yet expansive for thoughts and our minds, with an uplifting, joyful, happy, sunshiny presence.

We are hoping that this blog has helped enlighten you on roman chamomile, a very powerful yet soft essential oil with a vast spectrum of healing uses both for the physical and the emotional body. We love it and the next time you use it, think of us!

Lawless, Julia. The Complete Illustrated Guide to Aromatherapy: a Practical Approach to the Use of Essential Oils for Health and Well-Being. London, Element, 1997.

Previous Tea Tree Essential Oil: Surprising Benefits and Practical Uses Next What are the benefits of Cardamom CO2 extract?